Hairsticks, A History
Let me tell you about the most wonderful (and probably oldest) hair accessory in the world: the hair stick, also known as a hair pin or a hair bodkin. Or kanzashi, or binyeo, or…they have many names. You’ll see.
If you’re a fan of Janet Stephens, hairdressing archaeologist, you’ll be familiar with the term ‘bodkin’ as she uses it a lot. If you’re not a fan of Janet Stephens, whyever not?

Hair sticks have been used to restrain long hair for...probably as long as humans have had long hair, to be honest. Before we had bobbles/hair ties, before we had elaborate fancy schmancy barrettes or claw clips or any of that, we had...sticks.
And because humans like pretty things which are also durable, there are some beautiful examples of very old hair sticks which are made from bone and gold and silver and all sorts. With some super fancy decoration, too.
Did I hear you ask for pictures? My friend, we have ALL the pictures.
Kicking off with Africa, here’s a wooden hair bodkin from Tanzania:


Moving on to Asia, some Chinese Imperial hair pins:


Chinese pin from the Han Dynasty: 
And a Naga warrior hair stick from India:


This shaped bone dress/hairpin (500-300 BC) was found in East Lothian in England: 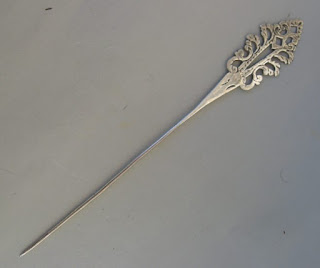 And a very swanky gold one from 16th century France: Catherine de Medici’s hair pin, which was found in a communal toilet in Fontainbleau Palace: Here’s a close up of those double Cs on the top: Nice.
The hair stick/hairstick/hairpin/hair bodkin: probably the world’s oldest and most widely used hair accessory.
And so pretty, right? I flipping love hairpins. I note that Dutch braids have made a serious comeback among the younger set...maybe it's time for a Hair Stick revival.

I live and hope, anyway.